Church of the Addolorata (Our Lady of Sorrows)

Near the town-hall  is the church of the Addolorata.
The building dates back to the fifteenth century.
The façade is characterized by a colonnaded portico surmounted by two elegant sixteenth-century stone windows, against the wall.
... (continues in the details) 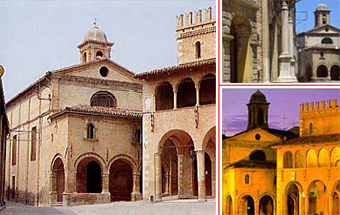 Church of the Addolorata, 15th century.

Near the town-hall  is the church of the Addolorata.

The building dates back to the fifteenth century.

The façade is characterized by a colonnaded portico surmounted by two elegant sixteenth-century stone windows, against the wall.

Up above there is a rose window dominated by a tympanum, decorated with terracotta friezes, and a dome-shaped bell tower.

Inside the church, with a single nave, there is a ceiling decorated by the painter S. Nardi from Fermo (1866-1924).

Of particular interest is the painting in the middle which portrays "the Grieving Madonna (the Addolorata) surrounded by Saints."

The apse has a gilded wooden altar, dominated by a tabernacle that holds the statue of the Grieving Madonna (the Addolorata).

Inside the church is kept the "Coffin" (as it is commonly called the wagon with canopy where the statue of the Dead Christ lies) that is walked in triumphal procession the evening of Good Friday.

The procession is thought to be the revival of an earlier tradition, that of the ancient medieval brotherhoods’.

The present "Coffin" appeared for the first time in the procession of Good Friday in 1870, having replaced the old litter from 1819. In 1868, the Brothers of the Holy names of Christ and the Virgin Mary had entrusted Professor Alcide Allevi with the task of designing the coffin, while Mr Lorenzo Mancini from Ascoli Piceno was responsible for the decorations.

To make the silver laceworks there was - as we have been handed down by our ancestors - a real competition among the young women of the village. Under Mrs Aloisa Donati’s guidance, they helped the Benedictine nuns in the delicate task. 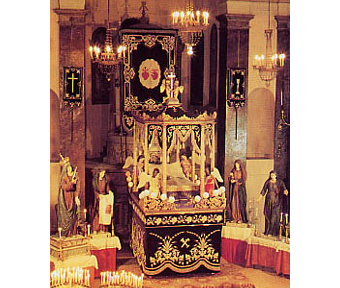 It took them two years of intense work to complete the embroideries and the sum laid out, amounting to 2.249,25 lire, was advanced by Mrs Maria Donati, widow of Mr Michelangeli, and later refunded by the parishioners’ offers.