The Collegiata church rises on the site of the former Oratorio della Trinità (13th century), as reported – respectively - by the historians Allevi in his "A zonzo per Offida" and Arduini in “Memorie Historiche della città di Offida".
The Oratory, with its statues and paintings, was demolished towards the end of the eighteenth century and was replaced by the new Collegiata, dedicated to Our Lady of the Assumption (the Assunta).
The construction of the church began in 1785 -... (continues in the details) 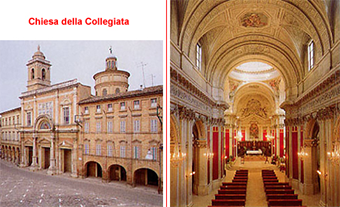 The Collegiate CHURCH of "SS.Maria Assunta" 18th century, by architect Lazzaro Giosafatti
On the left:Main façade
On the right:Central nave

The Collegiata church rises on the site of the former Oratorio della Trinità (13th century), as reported – respectively - by the historians Allevi in his "A zonzo per Offida" and Arduini in “Memorie Historiche della città di Offida"

The Oratory, with its statues and paintings, was demolished towards the end of the eighteenth century and was replaced by the new Collegiata, dedicated to Our Lady of the Assumption (the Assunta).

The construction of the church began in 1785 - under the direction of Pietro Maggi, from the Ticino area, and on a design by Lazzaro Giosafatti (1694-1781), using the safe of the material of the demolished monastery of S.Maria della Rocca.

The official opening of the church was on the 7th of April, 1798 and consecrated on April 19th, 1801 by cardinal Giovanni Andrea Archetti, bishop of Ascoli Piceno- as reads an inscription on the wall of the church, on the right of the front door.

The façade is a mixture of Greek, Roman, Lombard and Baroque styles. It is crowned by a balustrade decorated with classical pillars, grating windows and shell motives. The great central lunette, supported by two tall monolithic travertine columns, holds "the mosaic of the Assumption".

The work was created by the Vatican Laboratory in 1950 and designed by P. Gaudenzi (1880-1955) from Rome, to celebrate the Jubilee and the centennial of the miracle of the Madonna that had moved her eyes.

Beside the church stands a tower, scanned by pilasters; the tower ends with a balustrade cornice made of travertine marble at the top of which, on an octagonal base, stands the white statue of the Madonna.

The inside, in the shape of a Latin cross, is characterized by a central nave and a smaller cross-aisle. The former ends with a rounded extremity and makes the apse, while the latter has two wings at the end of which - in the shape of a semicircle - there are two chapels decorated with marble balustrades.

In the middle, where the two wings meet, stands the dome: 38 metres high, it is set off by a smaller cupola, in the shape of a peripteral tabernacle (surrounded by an outward facing colonnade).

The two chapels are flanked by flights of staircases that go down into the crypt, devoted to the Madonna of Lourdes.

On the left:Dome and Bell Tower
On the right: the Interior:,A glimpse to the dome

On the four pendentives of the dome the Offida artists Giuseppe and Giovanni Battista Bernardi (18th -19th centuries) painted the four evangelists, a copy of the original work by the old master Domenichino (1581-1641) preserved in the church of S.Andrea della Valle in Rome. The cathedral is divided into three aisles and consists of two wings of pylons surmounted by round-headed arches.

The church was adorned with stucco works by the decorators Fontana and Bernasconi from Milan in the eighteenth century.

At the end of the presbytery, up above, there are a few angels; some of them hold the name of the Virgin Mary, others are in the act of throwing flowers on the head of the Assumption.

The work was commissioned by Mrs. Margherita Cataldi in 1801.

The vault has a lacunar ceiling, painted in chiaroscuro by the local artist Giovanni Battista Bernardi. In the middle of the lacunars, among the light and shade effects, are set gouache paintings, a work by Giuseppe, the son of Giovanni Bernardi. The paintings date back to about the eighteenth-nineteenth centuries.

In the first chapel, on the right, is kept a painting ascribed to Simone de Magistris that shows "the souls of the Purgatory."

The second altar-piece houses a canvas portraying "The Madonna" on top and, to her feet, "the Beato Bernardo" and "S. Emidio”.

On both ends of the cross-aisle, there are two chapels with two altars made of scagliola, a material which imitates marble to perfection.

In the chapel of the transept there is the copy of a painting by Michelangelo Merighi, known as Caravaggio (1573-1610), that portrays the burial of the Christ. This chapel holds the Palio of the miracle, so called because, during the plague of 1850, the Madonna - from July to October of that same year - had moved her eyes more and more times, wiping out the disease. The Palio had been won by Giuseppe Desideri from Offida, during a horses race in Fermo, on the14th of August, 1840. 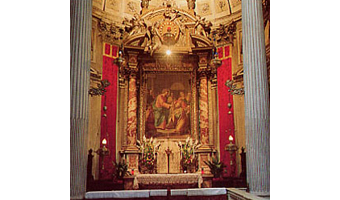 Altar of the SS. Sacramento, chapel of the transept to the left

Past the chapel of the Palio there is a sepulchre - part of which made of marble and part of scagliola - against the wall and decorated with statues and putti. Such sepulchre had been erected in 1800 in honour of captain Nicola Palmucci, of patrician family, at the behest of his widow, Dorotea.

Behind the main altar is a horseshoe walnut choir, a work by the master of choirs Alessio Donati (18th century).

The choir consists of stalls arranged in two rows: the upper rows are separated from each other by mullions supported by consoles which, in turns, hold up a few elegant wooden little vessels on foliage capitals. Under the great altar rest the remains of S. Leonardo (6th century), the patron saint of Offida, whose relics were donated to the town of Offida in the thirteenth century, by the monks of Farfa.

Front door of the Collegiate church

To the left of the presbytery, is kept a "polychrome crucifix” carved by Desiderio Bonfini of Patrignone (1576-1634) in 1612. Further on, there is the chapel of the SS. Sacramento with two beautiful choir-stalls carved in walnut wood, a work by G. Zazzetti from Offida, on a design by Professor G. Leoni, dating back to the years 1920-21. One of the stall-pieces was exhibited at the 18th Regional Exhibition of Modern Art in Ancona, in 1921.

Further on, there is an altar devoted to "S. Anna and S.Gioacchino". One more altar houses a painting by Pasquale Magini (19th century) portraying the "Madonna of the Rosary", "S. Domenico di Guzman" and "S. Pio V". The last chapel houses the baptismal font and a painting by Professor Ghino Leoni, dated 1917, showing "the baptism of Christ." 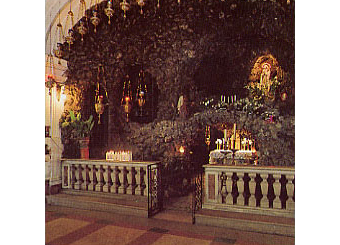 The Crypt and the Madonna of Lourdes’s Cave.

The crypt of the Collegiata Church

The crypt houses the Madonna of Lourdes’s Cave. Its miniature features perfectly reproduce those of the most famous cave of the Pyrenees.

Completely made of rocks, it was built by skilled local artisans in 1920 -using the material from Mount Ascensione - and designed by Professor G. Leoni; it was opened for the first time on the 13th of May, 1920.