According to the 1524 Town Statute with regard to Offida fountains to be repaired, cleaned and maintained:
"Any time somebody is reported a ruined or clogged public street, bridge or fountain in Offida, the Rector of Offida territory must arrange for the damage to be repaired by those in charge by law or by Offida’s Statutes. If he infringes the law, he will be punished with a 10-pound fine to be deducted from his salary. The expenses necessary for repairing public streets, bridges and fountains are at the revenue’s expense.” (Statute – Book V, chapter 32). ... (to be continued in details) 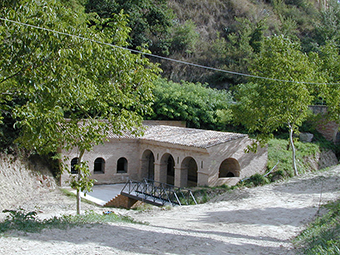 The Fountain of the Trocco

The fountain of the Trocco

The fountain dates back to the thirteenth century. The name comes from its original shape of a "trocco", a low and wide stonework basin. During the past centuries the fountain had been modified several times and, in 1859, was built a portico in order to cover the public wash-house and let the women use it during the winter, too. Still operative up to the 1950s and 1960s, the fountain though was less and less used when the first town aqueduct was installed. 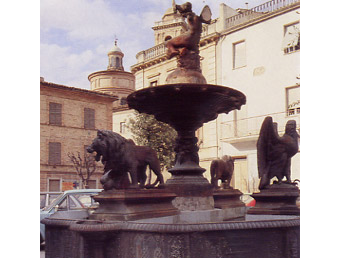 Great fountain or fountain of Flora ( the Goddess Flora)

Situated in Piazza XX Settembre. It was erected near the church of S. Nicolò, as you can see in the town map by Ferdinando Fabiani (1694), at the time of the town aqueduct installation (1887), using the waters coming from the Mount Ascensione slopes, near the area known as Polesio.

It is made of cast iron and supported by a stone base.

The tub has an octagonal shape, with eagles and lions to the four sides.

In the middle stands a strong stand surmounted by a cup on top of which is a figure of a winged garlanded woman with  Cherub.

The winged woman represents the goddess Flora (symbol of the Spring). The fountain had been cast in a qualified French foundry.

A detail of the Fountain of the Reaper

Fountain of the Reaper (Mietitore)

Located in piazza Valorani, it was erected in 1800.

This work of art had been cast in a French foundry, too.

The fountain, in the classical style, represents a young boy gripping – on one side - a scythe leaned on a bundle of ears of wheat.

To the elliptic base are two basins from which water pours.

The fountain is the symbol of 0ffida as a rural town.

The fountain is situated in piazza Bergalucci. It is not of particular interest from an architectural-artistic point of view; it was built in memory of the missionary preachings held in Offida about the end of 1935.

The fountain is characterized by an octagonal travertine base and consists of a round obelisk, made of travertine marble too, bearing a wrought iron cross.

Fountain of the (drinking) Trough

Located near the Fortress. It was erected around the 17th-18th centuries.

Fountain erected in memory of the people died from accidents at work.

Situated on Viale IV Novembre, the fountain was inaugurated in 2001.

The whole monument is characterized by a tiled travertine pavement, a fountain, a seat and a polychrome mosaic containing a brazier. 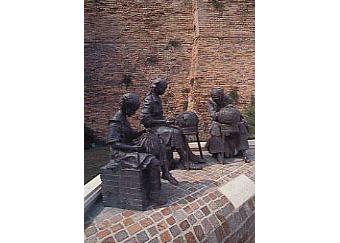 Fountain-monument dedicated to the Lace Workers

Fountain dedicated to the Lace Worker

Sited at the town gate, near the boundary walls, the monument was erected in 1983 by the local sculptor Aldo Sergiacomi. It consists of a bronze group representing three different generations of female figures, busy at making laces, as to underline the character of continuity of a precious tradition.