Through the alley and lanes of Offida, the visitor cannot help, especially in summer, meeting local women of every age who stand outdoor working at the production of lace. It is wonderful to see the speed with which they work the bobbins, or “cann’itt”, interlacing and pinning threads. The lace pillow, or “lu capzzal”, and the threads are fundamental to produce every possible figure: Offida Cantù, Punto Venezia, Punto Rinascimento, are different kinds of stitches reproducing animals and flowers, as well as precious and refined jewels.

Poem dedicated to the Lace Workers

Poem "The Lace Workers" by Vincenzo Maria Castelli, composed for Radio Ancona in August 1950 and dedicated to the Lace Workers of Offida Text of the Poem (in Italian).

Information on the origin of lace is uncertain.

The most important evidence of its first production come from old frescos, paintings and paper patterns, besides from historical publication which began around the 15th and 16th centuries. Both the painters Maestro of Offida in the second half of 1330 and Simone de Magistris in the late 1500s are assumed to have used Offida’s lace patterns for their works.

The name of Offida’s lace appeared for the first time in a document dated 1511, dealing with a donation of laces by the Town Council to the Holy Cross Church as a wish for putting an end to the 1507 plague.

In St. Augustine’s Church you can see a door decorated with a painting of the Annunciation dating early 17th century, in which the Archangel is dressed with a light and transparent veil adorned with laces.

Since 1600 lace production was no longer just a prosperous handicraft, but also a means of sustenance for several local families. Lace production thus increased and its distribution soon grew in quality and refinement, even beginning to be exported by merchants, as shown in a sale contract of 24th May 1612, today conserved in the Notarial Archive of Ascoli Piceno.

A flourishing production of pillow lace at that time is also evidenced by a petition presented by the Town Council to Pope Benedict XIII in 1728, in which the authorities of Offida asked for the banning in Marche territory of the lace made in the competing Veneto region. Worth of note is a sale contract of laces to the Count of Fermo dating from the early 19th century, which testifies an increasing spreading of this kind of lace, whose apex was reached by the end of the century.

In the 20th century the local lace was securely established worldwide thanks to the awards and appreciation it has received. In 1910 the first school of lace was established within the public school with courses held by the teacher Marina Marinucci.

Since the half of the century the Town Council and other local associations has promoted many initiatives to launch Offida’s pillow lace. For example, the summer lace exhibition held from 1969 to 1998, the Monument to the Lace-Makers created by the local sculptor Aldo Sergiacomi in 1986 and the annual “Golden Bobbin” contest, established in 1999 and still existing. Furthermore, in 1998 the Lace Museum was founded in De Castellotti-Pagnanelli Palace, which houses old and modern samples of laceworks in their wide-ranging applications.

Since 2004, efforts have been made to get a trademark granting the quality of this precious product. 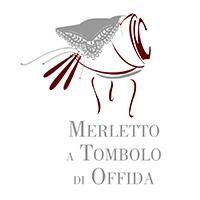 The trademark "Merletto a Tombolo di Offida" (Offida Pillow Lace) distinguishes Offida production of art and traditional laces, in order to protect the denomination of origin and to defend and preserve its work and productive characteristics. It can be exclusively used by lace makers who are included in the Offida lace producers' register which has been specially set up for this purpose by the Commune of Offida.

In 2010 there was the opening of the “Via del Merletto” (The Lace Street), a central narrow street historically devoted to lace making, with the installation of explanatory plates and panels.

The lace is made on a pillow (in dialect “lu cazzal”), set on a wooden pedestal called prebenna.

You also need wooden bobbins (“li cannijtt”), pins, the thread (linen, hemp, silk, cotton, sometimes mixed with silver and golden threads) and the design of the would-be lace made from a cardboard. Some works need a very thin needle (in dialect “l’aghitt”).

After pinning the cardboard design on the lace pillow, the thread is wound round each couple of bobbins which will be then pinned on the design. Now it is possible to start the work: it consists of two movements: winding and crossing. This procedure results in the stitches used to create transparent and light laces, full of spirals, foliage, fruit, flowers, stars and other works of artistic values.

Offida’s lace is classified into four kinds of stitches, according to the shape of their design, the production technique as well as the number of bobbins used.