The Monastery and the church of S. Marco are sited in Piazza Baroncelli, at the end of the Via Roma.
The historian A. Rosini in his volume "Compendioso racconto Historico della terra di Offida" asserted that the construction of the monastery and the church began a few years after the death of S. Francesco (1181-1226), and the Franciscan Friars themselves had built the two edifices.
... (continues in the details) 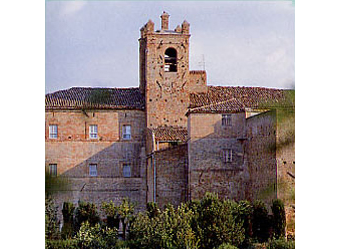 The Monastery and the church of S. Marco are sited in Piazza Baroncelli, at the end of the Via Roma.

The historian A. Rosini in his volume "Compendioso racconto Historico della terra di Offida" asserted that the construction of the monastery and the church began a few years after the death of S. Francesco (1181-1226), and the Franciscan Friars themselves had built the two edifices.

The presence of the Franciscan friars in Offida, at that time, is evidenced by the fact that two of them, Brother Andrea and Brother Bernardo, had acted as witnesses to the drawing of a deed on November 4th, 1236. With that deed the monks and the prior of S. Maria had donated the church and the square of S. Agnese (now Piazza Bergalucci) to the Clarisse nuns of S. Chiara.

Another outstanding presence in our town, according to the records of the time, was that of Brother Giacomo from Offida. The friar , a disciple of S. Francesco’s, in 1227 (eight months after the saint’s death), was working as an assistant to the nuns of the Penance, (G. Pagnani, “S. Francesco and Ascoli Piceno” - 1983).

Monastery of S. Marco, 14th century, against the foreground of the tower.

As far as we know, in 1243 Pope Innocenzo IV (1195-1254) had sent two letters – then lost - to the local authorities in order to persuade them to sell some properties belonging to the Benedictine monks of Farfa. This way, the friars could enlarge their convent, which was too small and narrow.

The historian A. Rosini, on this subject, quoted a bull by Innocenzo IV, dated 1252, about the subsidies given to the friars for the construction of their monastery since the local people could not give money because of the wars in the Piceno area under Emperor Frederick II (1194-1250).

As regards the date when the church was consecrated, Mr Rosini reported an inscription from 1359, written on a corner of the lower wall of the church.

During the centuries the whole structure had been altered more times and today it is the place where the Benedictine nuns have been living, since 1655 .

Though no official recognition of the nuns’ order in Offida had been accorded since 1515, there was a local religious community that welcomed the girls who wished to become nuns. 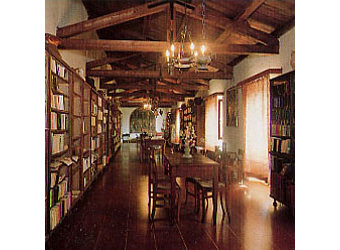 The Inside of the monastery, library of the Benedictine nuns.

On the 24th of May, 1629 died in Offida the lawyer Armenio Agnellini that, having no heirs, left all of his goods to the foundation of a female monastery, with the legacy of 20.000 scudi.

On the 17th of April, 1644 they made Agnellini’s house their temporary residence.

On the 4th of August, 1653 with the help of cardinal Gabrielli, bishop of Ascoli from 1642 to 1668, the nuns obtained the ex-Franciscan convent of S. Marco. They definitively moved there only in 1655.

The present structure of the edifice is characterized, in part, by features in the Romanesque-Gothic style.

The large portal from 1574 has recently come to light thanks to the latest restoration works. It is dominated by the typical Romanesque rose window belonging to the earlier façade of the monastery, facing west. At present, it is surrounded by a boundary wall and therefore it is not possible to see it.

The south flank of the church, that opens on Piazza Baroncelli, is quite interesting too.

Above all, the Gothic bows and some closed single lancet windows are noteworthy. The north flank too is not visible to the visitor since it is surrounded by a boundary wall; it is characterized by architectural features in the Gothic style. In the underlying monastery lies the crypt which has been recently restored. 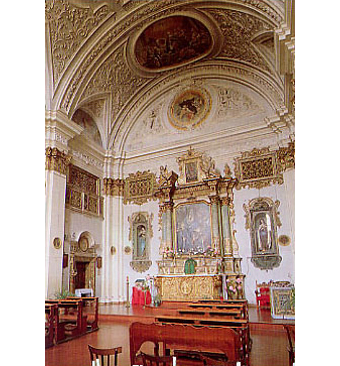 The actual Baroque church, built at the behest of monsignor Paolo T. Marana (bishop from 1728 to 1755) in 1738, was edified on the central part of the earlier church (that consecrated in 1359) which, so doing, was altered in its length and became smaller.

Inside the monastery, dating back to the eighteenth century, there are two frescoes by the Master of Offida (14th-15th centuries):

"The Annunciation, S. Caterina and clients"

"The Procession of the white-dressed Virgins Martyrs."

A wooden polychrome crucifix and a stone cross-shrine decorated with precious pearls are preserved in the monastery.

On the background altar, besides, there is a canvas dated 1742 by the painter Nicola Pannozzi from Mantova, portraying “the Addolorata with S. Benedetto da Norcia and S. Marco by her sides"; further back we can see "S. Luigi Gonzaga and S. Scolastica."

On the left: wooden polychrome crucifix
On the right: Frescoes by the Master of Offida: “The Annunciation, St. Catherine and clients”