Today, the archaeological museum "G. Allevi" is located inside the nineteenth-century De Castellotti – Pagnanelli building that has also housed, since 1998, the museum of the Lace, the museum of Popular Tradition and the town’s Picture Gallery becoming, this way, a major cultural centre.
... (continues in the details) 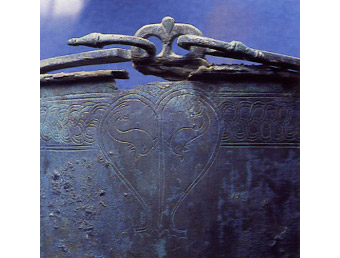 The situla representing Hercules struggling with a Lion (from the ancient private collection of historian Allevi) is now preserved in the British Museum in London.

Today, the archaeological museum "G. Allevi" is located inside the nineteenth-century De Castellotti – Pagnanelli building that has also housed, since 1998, the museum of the Lace, the museum of Popular Tradition and the town’s Picture Gallery becoming, this way, a major cultural centre.

A stroll through history:

The Museum was founded thanks to the numerous and fortunate archaeological excavations conducted/carried out in the second half of the nineteenth century by archaeologist Guglielmo Allevi (1834-1896).

Meanwhile, the Museum was inaugurated and located in an annex of the ex-convent of S.Agostino. It has been one of the most important private archaeological collections of the province so far.

In 1898, shortly after the death of the archaeologist, the museum was purchased by the Municipality of Offida.

In 1950 the ex-convent was turned into school premises, thus the archaeological finds were sealed in boxes and stored in a room of the town-hall. There, they had been left over twenty years.

Between 1972 and 1976 they were catalogued and rearranged in a museum located on the ground and the first floors of the town-hall by diverse Archaeology associations throughout Italy.

In 1996, to celebrate the centennial of Allevi’s death, the Museum got a face-lift, in particular from an educational point of view. In 1998, when the Museum moved to the today’s seat, new show-cases were purchased to better display them.

On the left an Amber bracelet belonging to the picena civilization, 6th century B.C.

The Allevi collection was originally far more extensive than it is today; incidents occurred in 120 years, in fact, had reduced the number of the finds from 4.200 of 1880 to the about 1.500 pieces catalogued by Archeoclub in 1996.

Nearly intact, however, is the heart of the "lithic Collection", of the two important Picene necropolises of Offida and Spinetoli, as well as the clay decorations of the Republic attributed to the legendary "OPHYS Temple". 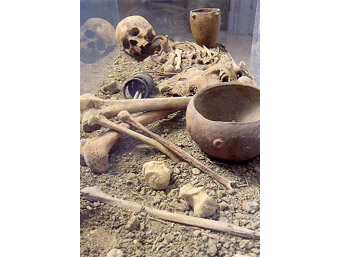 The collection has been displayed in the new rooms of the Museum following a precise chronological as well as thematic order; hence the itinerary/tour starts from the most ancient finds to the most recent ones.

Life and Works of Guglielmo Allevi

Prehistory: Finds from the Middle Palaeolithic, Upper Neolithic and the Bronze Age.

The Roman and Lombard periods