Ex-Convent of St. Augustine and Church of the Eucharistic Miracle

Near the town-hall Palace stands the ex-convent of Sant’ Agostino with the attached chapel of the Eucharistic Miracle, an imposing brick edifice whose construction, began in 1338, was completed in 1441.
The earlier building was edified on the ruins of an ancient pre-existing structure, which was a small church - devoted to S. Maria Maddalena (1254), so called at the times of Alexander IV (born ? - died in 1261), as reported by the local historians Rosini and Allevi - and a small monastery.
The construction (from the church foundations) was completed during... (continues in the details) 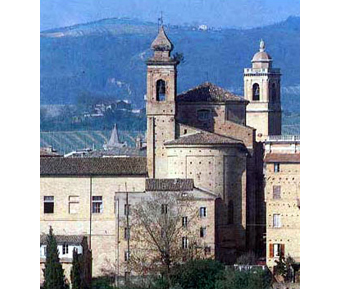 Panoramic view of the Church of Sant’ Agostino

Near the town-hall Palace stands the ex-convent of Sant’ Agostino with the attached chapel of the Eucharistic Miracle, an imposing brick edifice whose construction, began in 1338, was completed in 1441.

The earlier building was edified on the ruins of an ancient pre-existing structure, which was a small church - devoted to S. Maria Maddalena (1254), so called at the times of Alexander IV (born ? - died in 1261), as reported by the local historians Rosini and Allevi - and a small monastery.

The construction (from the church foundations) was completed during the priorate of a Brother Jacopo. An inscription on the central façade of the church, in fact, reads: “Tempore prioratus fra tris Jacobi hoc peractum fuit sub kD. MCCCCXXXXI" (1441).

The fact that the construction of the church had undergone extensive modification since 1350 was attested by the historian Rosini himself. In fact, an inscription on the north wall of the church – which cannot be easily interpreted - clearly bears the following date: A.D. MCCCL VIII (1358).

In the sixteenth century, as attested by the notary G. B. Radicotica with the deeds dating back to the years 1493-1514, the floor of the whole church was restored.

Other extensive modifications were made in 1933 and later in 1937.

The convent itself, according to Rosini, had been altered more times, precisely in 1609-1618 and even restored from the foundations in 1625. An inscription, in particular, tells of a restoration work from 1795. 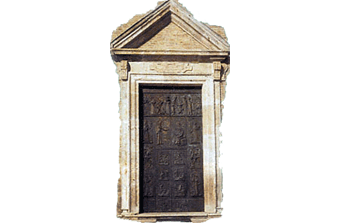 The architectural and stylistic features of the church date back to the year 1686.

An inscription of 1688, on the left-side façade of the church, tells about some works, most likely done to ameliorate the edifice structure.

The façade, in fact, is a typical example of the Baroque style.

On the portal there is a pediment and two niches for statues and traces of the fourteenth-century walled up rose window.

The north part of the church, despite the modifications, obviously reminds of the earlier fourteenth-century church; in particular the Romanesque-Gothic decorations - among which arch friezes – are quite interesting.

The former door - of which nothing has remained but an arch adorned of friezes - was replaced by a sixteenth-century white stone portal.

Cloister of the Monastery of S. Agostino

The church dome is of octagonal shape. Backward stands the apse against the Bell Tower from the characteristic Byzantine pinnacle.

Inside the Tower were kept the Municipal Funds.

In 1574 was built the four-sided cloister surrounded by a parapet with lined up octagonal columns , on a stone capitals base, and round arches.

On a wall of the cloister an inscription bears the date A.D. MDLXXIIII (1574).

In the middle of the cloister, according to custom, stands the well.

Throughout the cloister it was possible to enter the refectory. At present, it doesn't exist anymore since the premises have been turned into school classrooms (as from 1870, in accordance with the 1866 law that had expropriated the Church possessions), as well as all the premises nearby the cloister.

Both the refectory and the cloister vaults were painted in frescoes, as reported by G.Allevi in his work "A zonzo per Offida."

Such frescoes were mostly characterized by flowery motives, as well as by leaves, shells and fantastic animals figures; these eighteen-century works have been attributed to the local artist Giuseppe Carlini. Unfortunately, nothing has remained of them, after long time. 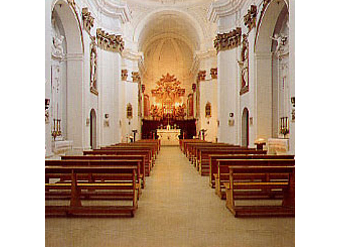 Inside of the Church of S. Agostino

The inside of the church – in the shape of a Latin cross - is characterized by a single nave and is rich in eighteen-century gilded capitals.

To the right and to the left, on top, are niches with statues of saints of the Augustinian Order: "S. Agostino, S. Fulgenzio, S. Simpliciano, S. Prospero, S. Tommaso da Villanova, S. Gelasio pope."

The interior is rich in side altars and numerous, as well as valuable, are the paintings.

Above the first altar, to the right, is "The Adoration of the Magi" by Carlo Allegretti of Monteprandone (17th century).

The painting, a nocturnal scene in the classical style, is certainly the most valuable work among the others in the church, as well as a masterpiece of painting technique.

The artist, in fact, skilfully painted the upper part of the canvas bright, with a masterly use of the light.

Above the second altar is "S. Tommaso da Villanova" by the painter Ludovico Trasi (1634-1694) from Ascoli.

Above the third altar is a seventeenth-century wooden statue of "S. Nicola da Tolentino".

On the four pillars of the cupola, in the Baroque style, are four canvas with scenes from the Eucharistic Miracle event. They had been donated by the Vitali Family from Offida in 1759. 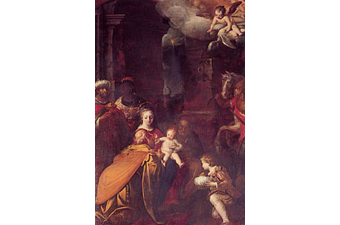 Further on, to the left of the apse, is an altar above which stands "the statue of the Immaculate Conception."

The main altar, dating from 1934, is a work by the local sculptor A. Sergiacomi as well as the bas-reliefs on the walls, representing the Via Crucis.

In the middle of the great altar stands a sixteenth-century "wooden Crucifix", a work by an unknown artist.

Behind the main altar is the eighteenth-century walnut choir arranged in two rows, a work by Alessio Donati from Offida, known as the “Master” of choirs .

Behind the choir, going up a backstairs, you can enter the chapel of the Eucharistic Miracle.

In the church is also kept the shrine of the Sacred Spina Christi. This fourteenth-century cylindrical shrine is made of golden and silver strips and a plate glass holding a Sacred Spina, according to local tradition and popular belief (Statute of Offida, Book I chapter 3).

The Major of Offida, during the celebrations in honour of the Sacred Spina, had to offer a six-pounds candle to the church of S. Agostino 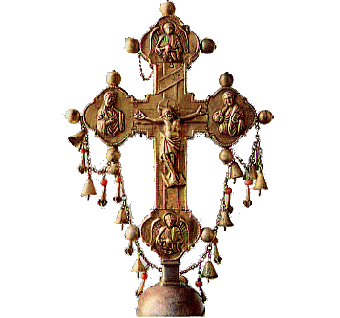 At the back of the apse there is the chapel that hosts the rests of the Eucharistic Miracle occurred in Lanciano in 1273, when Ricciarella, in order to appease her husband Giacomo Stasio, decided to mix his food with a powdered consecrated host which then turned into bleeding flesh. After long vicissitudes, the relics of the Miracle, officially recognised as such, are kept inside this church. They consist of a piece of host turned into flesh and blood, a 13th-century table-cloth, unique in its kind, and a blood-stained cup of the same period. The fragments of the host are kept inside a fourteenth-century silver cross created by a Venetian goldsmith. The relics are placed inside the chapel secured by an iron gate and two fifteenth-century walnut shutters. It is possible to admire them only on 3rd May, during the celebration of the Holy Cross Day 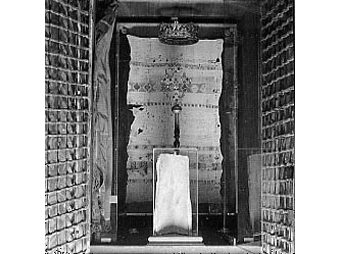 Reliquary of the Holy Cross