The existence of a former theatre inside the town-hall Palace is testified by a record in the Historical Archive of the Commune dated the 16th of October, 1819.
The record also relates of the present Serpente Aureo Theatre ... (continues in the details) 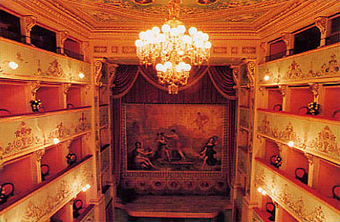 The existence of a former theatre inside the town-hall Palace is testified by a record in the Historical Archive of the Commune dated the 16th of October, 1819.

The record also relates of the present Serpente Aureo Theatre.

It says that before 1768, inside a room in the town-hall (council chamber), there was a stage, built "without distinction of classes."

Just "to remedy", as the record reads, this awkward situation, on the 8th of July, 1768 the local authorities accepted Paolo Cipolletti and Gaetano Castellotti’s proposal concerning the construction of a wooden theatre with a stage and twenty-nine boxes arranged on three floors, in order to replace the original construction.

The construction project provided that only the first floor – a brick work - would be built. The total cost should be charged to private citizens whereas nothing should be paid from the Community. In exchange for the use of the council chamber, The Commune had been granted the central stage.

The private citizens could have the use of the boxes by paying a sum amounting to eight scudi each.

Very soon, though, they realized that the theatre - completed in 1771 - was too small. A lot of noble families, in fact, were left with no boxes; besides, the stalls were not large enough to hold the lower classes and the first floor of the boxes, being too low, shortened the distance between the audience in the stalls and that in the boxes. 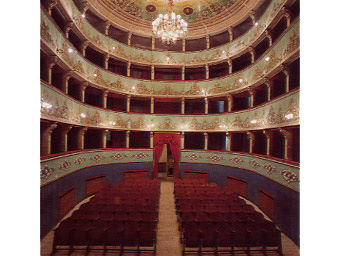 A view of the "SERPENTE AUREO" Theatre

However, despite the discomforts, the theatre remained unaltered up to 1820.

There would be, meanwhile, a constant need for a new theatre so, during the town council session of 21st October 1801, architect Paolo Cipolletti was entrusted to build the new theatre, modifying therefore the original structure.

The construction of the theatre – designed by the architect - began in 1820, nearby the courtyard north of the town-hall Palace.

The present Serpente Aureo Theatre, renovated in 1862, is a real gem of Baroque style, of proscenium type or most commonly called Italian type, built in a "horseshoe" shape. it doesn't have its own façade and the entrance is set under the town-hall Palace portico.

Through a foyer decorated with statues representing four Muses, you can reach the theatre hall that consists of 50 boxes arranged on three floors, a gallery and stalls.

The hall is decorated with stucco works and gilded carvings on a green background, a work by G. Battista Bernardi of Offida (18th -19th centuries).

The vaulted ceiling, representing Apollo and the Muses, was painted by Alcide Allevi (1831-1893).

All around, eight medallions represent the most famous opera and drama composers. An ornamental chandelier with crystal bulbs overlooks the entire vault.

The stage still preserves the old curtain on which is painted the legend of the mythical Golden Snake (Serpente Aureo). 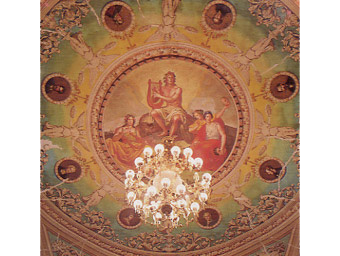 In 1900 the theatre had been altered more than once. In November 1907 the gas lighting system was replaced by an electric installation; in 1922, on a project by engineer G. Condio, the stalls were lowered; between 1928 and 1930 engineer Rosini reinforced the structure; in 1950 one of the boxes was used as a projection room; in 1954 the entire flooring was restored and the theatre was provided with a heating system. In 1991 they began to fit the essential services and installations inside the theatre; these works would be completed in 2002 when the theatre was officially reopened. Today, the structure is used for cultural events and for the big Carnival Parties.